Looking Back, The Rag Pickers

"Thunderously, unarguably, the Sermon on the Mount proves that before God we all stand on level ground: murderers and temper throwers, adulterers and lusters, thieves and coveters. We are all desperate….Having fallen from the absolute Ideal, we have nowhere to land but in the safety net of absolute grace.” (Philip Yancy, The Jesus I never knew)

In the housing society where we first lived, Rock Garden, a family of rag pickers served together to collect and dispose of every household’s garbage. It was a husband and wife team and they had at least eight children who crawled around under the shade of the parking garage, waiting for their parents to finish. The entire family had faces twisted with famine, neglect and disease. The father's body was misshapen from polio. The mother, though probably just in her thirties, looked fifty. They were racked by poverty. And yet they were a family. Still together. Still trying to feed every member. The children were covered in grime, their noses ran, and they all had eye infections. Their rags and their very presence in our pristine housing society was out of place. No one allowed their children to play with the rag pickers’ children. They were ignored completely, like the very garbage they collected.

The woman was obviously pregnant and underweight. She looked so ill herself, I wondered how her baby could possibly be healthy. As her time grew close, she came by and asked me for some medicine, or money for the hospital or some request connected to the birth of her child. I believe I gave it. I didn't see her for a few weeks. Then she came by again collecting the garbage from our doorstep. I asked where her baby was. The baby girl had died soon after birth in their slum dwelling. A dwelling, constructed of bits of tin and plastic. The torrential rain had made their house too wet, and she had died of exposure.

The rag pickers and I didn't have much in common, except that my children were ostracised too. The society was full of children, but my children played alone. When, in exasperation I asked several other mothers who lived in the apartments around me, they answered sheepishly, but honestly. “You all eat meat, and we are vegetarians.” Apparently eating meat contaminated my children enough that they were unfit playmates.

To say I raged internally against these injustices against my children would be an understatement. There were so many hidden cultural codes: rules for dress, child rearing, food, friendship, religion, and every aspect of life.

Every culture has norms. I had lived in several countries before, including Uzbekistan. But I had never encountered a country so rigidly divided into hundreds of strata; economic, ethnic and religious demarcations. The caste system. It permeated everything, explained everything (to those who understood it), but made life in India a complete mystery and frustration for me.

As a foreigner I was caste-less, which was both good and bad. I enjoyed the sense of freedom that comes when my very existence defied categories. It meant the culture really couldn't tell me what to do, and that they had no real expectations for me. There were certain excuses made for me, I know, as I blundered about in relating to my neighbours.

I was a complete anomaly in Indian culture. Educated, middle class women simply didn't have more than two children. I had the ghastly sum of four. And not just four children, but four children, aged five and under. Abortions were the rule of thumb for everyone, and was the most used form of birth control in every class. A huge educational campaign had swept the country forty years before, a valiant attempt by the government to control the exploding population. While many middle and upper class families had responded, the lower classes had not.

Every middle class mother sent their child to school at two and a half years, I home-schooled all four. Our family must have looked like a clear case of provincialism and pure ignorance. But coupled with my nationality, my speech, our comfortable rental, and the fact that my husband was a lawyer, meant I didn't fit an easy category.

Categories, hierarchy, judgements. How much of my life has been consumed with finding where I fit in society?

Many years later now, the rag picking mother is still with me, her face, pinched and worn at thirty, watches me. As I think about her children, dead, and mine living, her ostracism and mine, her house of tin and plastic, mine of stucco and stone, I cannot shut her out. I cannot feed her children, quell her hunger, or deaden her pain. I am helpless in the face of her want and misery. Still I dare not ignore her. She stays my hand from self-centred extravagance. She entreats me to live openly, generously and with kindness. She calls me to love the whole of humanity, not just the beautiful, brave and rich. but the broken and the poor. We are on level ground. 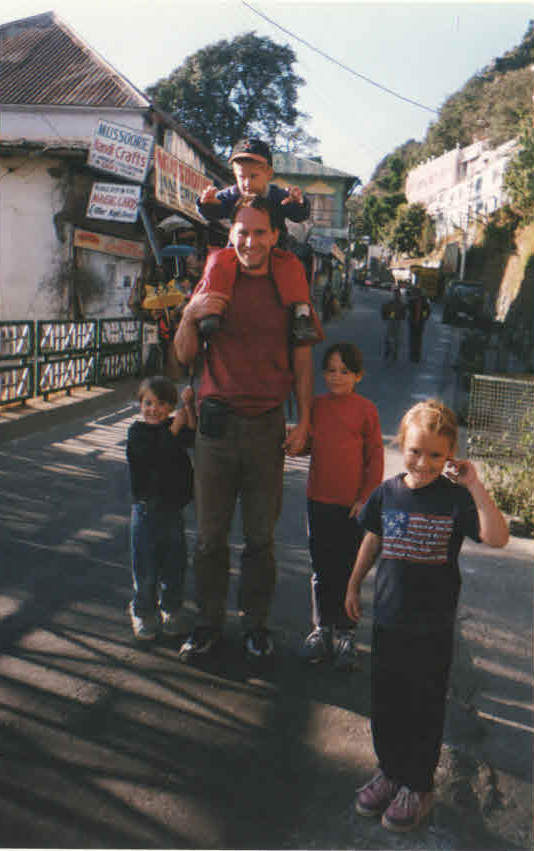 Greg and the children.
1 view