When the storm comes Will you reject the rain If it falls not soft If it falls not tame When the wind blows And calls your name Will you run in fear Will you hide in shame Are you strong enough to bend Don't stand against the wind Cause you know you're gonna break.

Greg, Abbi, Morgan and I have been bending a whole lot lately. This particular storm started a couple days before Christmas, late in the afternoon just as I was beginning to wrap presents in anticipation of Christmas day. The crunch of tires on dirt and the sound of a powerful diesel engine alerted us to a police jeep climbing up our narrow, steep drive.

A police officer, head of the local Foreign Registration Office (known as the FRO) bustled into our living room carrying a stack of documents. After a preamble expressing his condolences for the very bad news he was about to give, he promptly handed each of us a separate letter addressed individually. Short and concise, the letter stipulated that we had to leave Indiawithin 7 days from receipt of the letter. There was no reason given of why we had to leave, or of what crime we were accused. 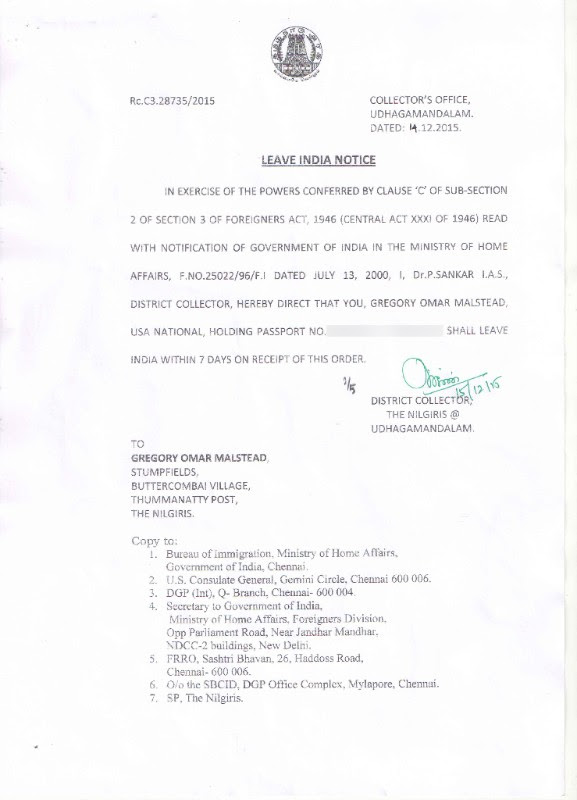 We sat stunned, a blank look reflected in each of our faces, incredulous.

How exactly were we supposed to take the kids out of school (Abbi is a junior and Morgan a sophomore in high school), sell our house, cars and furniture, pack our remaining belongings, find homes for the horses, dogs and cat, and hand over Freedom Firm to another leader, all within seven days? Would our two older daughters, Kavita and Rachael, now studying in the U.S. be able to visit their childhood home again?

We knew that many foreigners were being asked to leave India. Later we discovered up to 30 foreigners had been issued similar directives and had left India in a hurry. A couple months before, friends of ours living in Ooty for 10 years were denied a renewal of their visa and had to leave abruptly. My own parents flew to Bangalore in Octobers last year, only to be denied entry to India (they had a valid visa) and sent back to the US on the next flight, no explanation given.

We knew it could happen, but we didn't think it would happen to us because of our “OCI,” (Overseas Citizen of India) status. Close to a dual citizenship, it granted us lifetime visas and many protections given to Indian citizens.

Local friends were shocked. If the central government does this to OCI holders, who is safe? For our family, it felt much more personal. This is our life here. Fifteen years of putting down roots, of learning, of struggle, of building, of creating, of victory and of loss and above all, fifteen years of fight. A good fight. Would we have to leave like this, accused of some nebulous crime, that even the government refused to name? Was our time really up?

Of course it didn't end there, because we are still in India, 50 days later. A trail of miracles have kept us here on this soil, in this land. I wish I could say its all behind us now, that closure is certain, and that we can move on. But life is not often so tidy and we are still waiting, still bending, weathering the storm that could leave us without a home.

*Greg will detail our petition in the Madras High Court, the outcome and the weeks after, in our next blog, next week.