For though, seduced and led astray, Thoust travell'd far and wander'd long, Thy God hath seen thee all the way, And all the turns that led thee wrong.  The Hall of Justice. (Guy Mannering, Sir Walter Scott)

Night has fallen and it is bitterly cold.  We climb into bicycle rickshaws, ancient pieces of rusted machinery, and I feel sorry for the man who has to cycle Greg and I a few blocks down the road.   Greg sends off the investigators to engage the girl. Surendra stays with us. We meet the DCP but almost immediately are called in to meet the higher ranking City Police Superintendent.  A lady police officer is present and waiting. Green tea is served and the Superintendent wants to know all about us.

When he hears I was born in India he warms up and asks lots of questions.   He wants to know why we would come to India.  We have a long discussion about girls who are sold into prostitution and whether they want to be there or not.  He looks at Greg and I and comments how amazing it is that I have found a husband who wanted to join me in my passion to rescue girls.  I smile, I know it is.  And suddenly I am overwhelmed with the knowledge that we were called together, placed at this moment in time together to tell this story, to motivate a man to rescue one girl in a brothel just around the corner.  A brothel so close you could spit and hit it.

Greg stands up and the police move into action.  “Just stay here and wait, madam.” The superintendent is solicitous but firm.  I sink obediently back to my seat.  “Ah sir, my wife has never been on a raid, its her first time, would you please allow her to come?” Greg, interjects so politely, so perfectly respectful I imagine he is difficult to refuse.  “She wants to come?”  I nod vigorously with what I hope is a confident smile.  “Then, let her come.”  The surprise of it almost kept me in my seat.  But everyone was moving now, and quickly.

We are a good sized force this night, moving down the narrow street.  Women constables striding along with the men, maybe 14 in all.  I hobble along as fast as I can, still recovering from torn ankle ligaments. The streets are strewn with rubble and have deep potholes.  The only lights come from the stalls selling sweets and chai and other goods.

A policeman keeps close to me the whole time, asking questions and making small talk as we walk the 200 meters to the brothel. We turn down a tiny alley and suddenly we are there.  Moving up some steps, we squeeze through the narrow passageway into the main room of the brothel.  The police woman already has her hands on the targeted girl, and I hugged the wall as the arrested brothel keeper and the girl move slowly out of the brothel, with police trailing behind and police standing in front.

It was all very peaceful and cooperative and fast.  Many of the police simply stood around watching and seemed reticent and quiet.  We all trooped back to the police station, girl and brothel keeper in tow.

And the rescue was over. Little noise, no fanfare.  Just a scared girl and an angry brothel keeper, who, from the beginning refused to show her face, and just kept it completely covered with the tail end of her sari....I wondered why she needed to be so incognito? 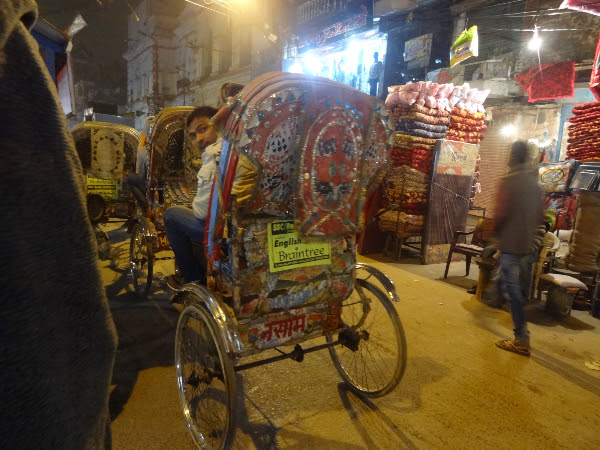 On the way to Meerganj police station, Allahabad for the raid.