The God of Outcomes

“I learned the hard lesson that all sense of control was an illusion, and that though my dreams for the freedom of girls were good, there was not one single “outcome” I could be sure of.”

Rani was one of our very first girls in our Aftercare home, Roja in 2006.  She stayed with us for four months, and then left to stay with her then boyfriend (now husband).  A year later she attended an Avalanche wilderness camp that we hosted near Ooty.  She had lost a lot of weight and was clearly struggling physically.  She shared with us that her hopes for marriage had not come to pass and she wondered if she could come back to the Aftercare home.  We agreed, and for the next two years she stayed industrious on her Aari loom, making beautiful embroidered bags and pillow covers.  We employed her, gave her a safe place to live and made sure she took her ART medicine every day.

One day, she and another girl in the home, Jamila, disappeared without warning after stealing money from our German volunteer for a bus fare out of Ooty.  The two girls were three months deep into the planned reintegration phase of our program.  They had moved out the Aftercare center, and had moved to the YWCA, a local hostel for working girls.  Freedom Firm's plan was that all girls eventually move out of the home and into the real world where their status as a trafficked girl would no longer be remembered, and they could move beyond stigma and be reabsorbed into mainstream society.

Their new found freedom from full residential care home (Roja) to the relative lack of supervision of a working women's hostel went straight to their heads. Everyday they came to work at Ruhamah intoxicated with their freedom of choice. With money from their salary in their pockets, and weekends to themselves, without full-time staff to push and prod and remind for medicine, homework and food, they were without an internal motor.  The muscles of their self-will, self-discipline and self motivation were non-existent and had atrophied and disappeared in the climate of institutional care.  These were early days for Freedom Firm in understanding the process of reintegration.  These were early days in understanding how “helping” can sometimes hurt our girls, and weaken their drive and responsibility.

Within the first few months at the YWCA, they both picked up boyfriends and began riding around Ooty on the back of motorcycles. Shortly after, they left Ooty, and headed for their old aftercare home with Oasis to pick up old paychecks from that organization, replete with  horror stories fabricated from the two years they shared with Freedom Firm.   They were angry at Freedom Firm, and worked hard to justify their actions to their old aftercare home workers at Oasis.

Rani was the strongest, sanest, smartest and more responsible of the two.  She had learned to read English and Hindi in her years with us.  Jamila must have had a learning disability because try as we might she did not learn to count to ten.  Yet she could speak English with ease and her Aari embroidery work was impeccable.  Rani and Jamila were heading home to their village, a call from an Oasis social worker informed me.

Deeply grieved at the way in which the girls left, I struggled to make sense of the years of investment in their lives.  2008 were “early days” in aftercare, days when I blamed myself for relationships that went south.  I wondered if our work had any real significance. I wondered if what we did mattered.  I began to lose faith. It was the beginning of my long years of disillusionment, where my work went forward only because I clung to Greg's unshakable faith in our calling.

I had come to the end of my belief in myself and my ability to make any difference.  I blindly stepped along a path that wound along the edge of a very deep precipice.  White fog was so thick I could only see the next step and the next.  Night after night I wept and grieved, and the fog that surrounded me became my truth.

Years later the view would clear, and I would glimpse the truth that was there all along, but that I was unable to see.  That the mountains were beautiful, the girls were beautiful, life was beautiful, my husband was, yes beautiful, as were my precious children, and that I was lucky to be alive. I learned the hard lesson that all sense of control was an illusion, and that though my dreams for the freedom of girls  were good, there was not one single “outcome” I could be sure of.  Girls changed from day to day like the mountain weather of Ooty, instantaneous, fitful and without warning.

Rani and Jamila typified what happened to most of our girls in our Afterare home.  We counseled, educated, doctored, employed, dressed, fed and entertained them for years. We agonized and prayed for them, found schools for their children and hospitals for their illness.  Our gifts streamed in an unending and unbroken line.

Yet they would come to a point, usually when they had moved from the Aftercare home, Roja to an independent hostel. While continuing to work for us they would do something to deliberately distance themselves from Freedom Firm and then disappear.  I often thought if they would just come to us and say they wanted to go home, we would throw them a proper good bye party and with all our blessings, send them on their way.  But closure never happened that way.  Perhaps we never really gave them that option, perhaps they recognized how much leaving Ooty might disappoint us.  Whatever the psychology behind their disappearance, closure often took the form of wrongdoing on their part before a final break.

Rani called me one day about a year after she had left Ooty.  Her voice crackled with a bad cellphone connection, but I could hear her tears.

“Didi, I am sorry I took the money.  It was wrong, please forgive me.”  Relief that she was alive and safe overtook me.  My doubts anger and disappointment rolled away.  I reassured her of my love and that there was always an open door for her in Freedom Firm.

I didn't hear from her for four years and then, there she was, throwing her arms around me, telling me how much she had missed me and wanting me to know and love her family.

(Read blogs back to part 1 of 4 for the continuation of this story!)

Photo: Rani with her second child 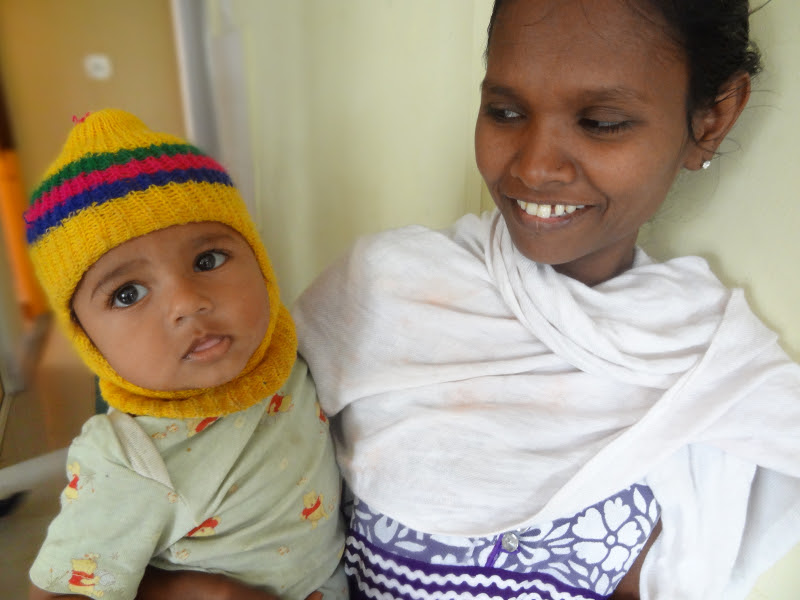