Have you ever wanted to know what happens to girls after they are rescued?  What do their lives look like a year after rescue, two years, five years, ten years?  Being a part of Freedom Firm has meant that Greg and I have had the privilege of walking next to girls as they journey through the protection of an aftercare home, the shocks of reintegration into society, marriage, children, health issues and job transitions.  We have seen them courageously face the effects of disease and trauma in the years after their rescue.  Rescue is just the beginning.

No slave is responsible for actions they are forced to do while in bondage.  But once emancipated, then comes freedom of choice. With freedom from the brothel comes the inevitable ability to choose good or evil.  Consider Adam and Eve, the apple and the serpent.  Never is the story of life after rescue a single clear rising trajectory of positive decisions in the life of our girls.  Or in our lives, for that matter.

The next series of blogs will be tracing the story of one girl, Rani after rescue in 2006 until present day.

Rani is one of the many girls that stayed with us for a few years, then disappeared entirely off our radar screen, and then suddenly, with no warning re-emerged.  Its a scenario that has played itself over and over these last eight years with Freedom Firm. There are a hundred reasons why they go, and probably a hundred why they return.  Navigating their choices, both when they leave and when they come back requires a hard look at motivation and need.  Ultimately we want to help girls help themselves.  The last thing we want is for them to become dependent on Freedom Firm or on us personally.  Often that means refusing to “fix” their problems with money or hand outs.  It means pointing them again and again to the opportunities that surround them for survival, so that they can truly live with dignity.

Rani came back to visit us in Ooty, a surprise visit after four years of silence.  She came with her husband and little daughter in tow. I know her husband is an early alliance of hers, possibly prior to her trafficking.  Her four year old daughter, Shivani is beautiful.  Rani and her husband are HIV positive but her daughter is not.  Why are they resurfacing after all these years?  Why are they reaching out to us now?  Her husband is an itinerant worker, picking up daily labor jobs when he wishes, and drinking his earnings as quickly as he makes them.

My guess is critical, not kind.  Rani is probably in a place of desperation.  Her husband is not adequately providing.  She does not have a job, and she is searching for support. I believe they want money, and they figure Freedom Firm is an easy take. They have traveled two days by train and bus all the way from Mumbai.  What they want is difficult to perceive.  They are veiled, testing the waters.

Greg and I take the family for some mutton biryani (a one pot goat rice preparation) at a mid range restaurant.  We want to get to the bottom of the visit.  Rani begins describing the state of her health in broken English.

“Yes, Rani,” I answer.  “HIV medicine will make you sick at first.  But only for a few weeks.  Then your body adjusts and you will be fine. You must take your medicines!”

“No Didi, I will die.  So sick, so sick. I cannot take the medicines.”

I didn't hear from her for four years and then yesterday, there she was, throwing her arms around me, telling me how much she had missed me and wanting me to know and love her family.  I felt like I was caught up in some play, some unwilling part of a theatrical performance designed to get something.

As Greg and I sat across from Rani, her husband and daughter, Rani rose and placed Shivani on Greg's lap.  An instantaneous fear leaped into the child's eyes, as she looked anxiously at her mother.

“ Greg Bhai is your daddy now,” Rani said.  “ Mala didi is your mommy.”  “OK?”  Shivani started to sniffle and raise her arms across the table to her mother.  “You stay here, OK?”

My gaze narrowed at Rani, “What are you doing, Rani? Don't tease your daughter like that,” I said angrily.  Shivani was becoming increasingly anxious.

She continued, “I am pregnant.”  Later I learned she gave birth to another daughter after Shivani, and had given her up for adoption.  Now she was expecting again, in her state of illness and weakness, poverty and strife.  She was afraid for Shivani.  She was afraid for her unborn child. She had resurfaced to find a secure future for her children. 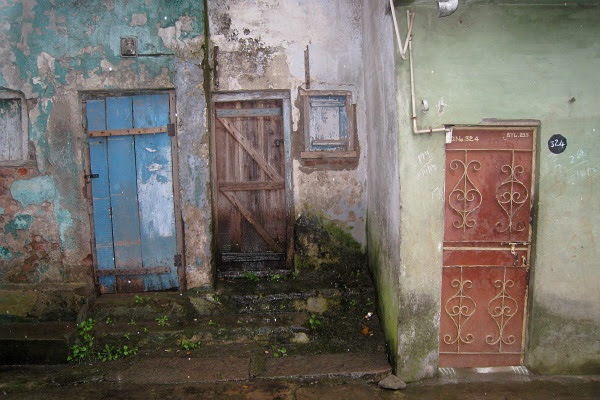