The Psychology of Slavery

“'Of course, there are times when there is pleasure,' said Rani Bai. 'Who does not like to make love? A handsome young man, one who is gentle...'

She paused for a moment, looking out over the lake, smiling to herself. Then her face clouded over. 'But mostly it is horrible. The farmers here are not like the boys of Bombay.'

'And eight of them every day,' said her friend Kaveri. Sometimes ten. Unknown people. What kind of life is that?'

'Every day my children ask, “Who is my father?” They do not like having a mother who is in this business. - 'The daughters of Yellamma,' by William Darymple

Our work is rescuing minor girls out of sexual slavery in the brothels of India. Most girls (thankfully) take the freedom we offer and run with it, never turning back. But there are some who do not.

I have glimpsed the lives they have left and its truly difficult to grasp why they might return. A few years ago I met up with Mira, a girl we had rescued in 2000. She was just 15 years old at the time. Already her few years in the brothel had bequeathed her the HIV infection and more cigarette burns and scars from beatings than a body should ever bear.

Her brothel keepers were eunuchs, and these in particular seemed to have the worst traits of both sexes. Their ferocity was animal like in its strength and those who crossed them lived to regret it. Mira had tried to run away several times. Each time she was caught, burned, beaten and kept in an underground hole for days without food and with little water.

Years after rescue and her three years in our Aftercare home in Ooty, Mira met me in Mumbai. While she was firmly and fully committed to an alternative lifestyle, she was deeply concerned about her friends who had returned to prostitution. She wanted me to see if I could talk to her friend and convince her that there was another way. She took me to her friend's house, deep in the brothels of Kamathipura, one of the famous red-light districts in Mumbai. Ducking under a low doorway, Mira led me through a corridor so narrow my shoulders grazed each wall as I walked. Moving sideways to avoid the pimps, children and women who thronged the passageways, we threaded our way to Poona's room.

In the hallway just outside the room we found Poona squatting in front of a two burner gas stove on the floor. The rich smell of chicken curry filled the air. Poona's husband was there. He was also her pimp. Her little baby reached his arms for me and I gave him a cuddle. We shared a meal while they proudly showed me photos in their photo album. I was honored that she would cook for me, and share her space and her family. I also felt incredibly sad. We all sat on the single bed that filled the entire room. A few hours later Poona would be receiving customers on the same bed.

I reminded Poona that she had alternatives. She could make jewelry with Ruhamah Designs. I might be able to find her a different job, if she didn't want that. When her son was old enough we would help her with education, we would help her with her health care. There were so many things she could do with her life. She shook her head. “This is my life. This is what I was created for. This is my karma.”

Mira led me back outside again. She had chosen a different course, and had lived each day of her freedom to the fullest for the last eleven years. Tough and savvy, when I asked her about her boyfriend she smiled. “Oh its good to have a boyfriend. He wants to marry me, but I say no.” When I asked her why, she shrugged. “I can never have anyone own me again. It is better to be alone.”

Freedom to her means total control over her life. She works as an entry level secretary, and she rents her own one room apartment. Fiercely independent, she also consciously values her health. She understands all the implications of her disease. “I only eat vegetables, rice and lentils, no oil, nothing fried.”

I struggled to process my time with Poona. Its so hard for me to understand that a girl who had already experienced freedom could choose to go back to prostitution, willingly. Or was it willingly? Her husband clearly was a threatening coercive force and made a lot of money off her every night. But still, she had friends, she could walk away, others would protect her, she had a choice. Why didn't she make the right choice?

Clearly the brothel life is “horrible,” as the Devadasi in Darymple's story says so aptly. Its a life of disrespect, abuse, disease and it is a wretched legacy to leave to their children. So what are the ties that bind? The chains are spiritual, psychological, cultural, economic, religious and have roots so deep I cannot untangle them. I only know I have sat in the brothels with girls who had tasted freedom and then turned their backs and walked again into bondage.

I am reminded of a people group who were saved from slavery in Egypt thousands of years ago. Although their lives were unbearable in Egypt, once they were free, they still longed for the garlic and onions they tasted in the land of slavery. When they travelled their road of freedom in the hot and dusty reality of a seemly endless wilderness, they must have lost sight of the promised land. If you don't believe there is something better ahead, its easy to look back.

Is it possible that freedom can be harder and more difficult than slavery? The slave is a recipient. The slave is a victim. The slave is passive. She has no choice. Freedom demands choice, active participation and the hard work of self- motivation. Freedom requires the will to change. The choices to do right and continue free and uncompromised, unfettered by the people that would bind you, and the evil that would engulf you, yes, those choices are often lonely, barren, tasteless and arduous.

Learning a new trade, living a disciplined life following a clear schedule, obeying supervisors and living kindly with co-workers, turning away from empty promises and the lure of gifts, living without a man, learning to forgive, trusting new people, breaking with the old and fully embracing the new, that is what it means to walk out of slavery. It takes tremendous courage to change. It takes believing you were made for something else.

* Devadasi are a women who are married to the Hindu goddess Yellama when they are 5 or 6 years old. While rooted in an ancient religious practice, it is now a direct route to prostitution. 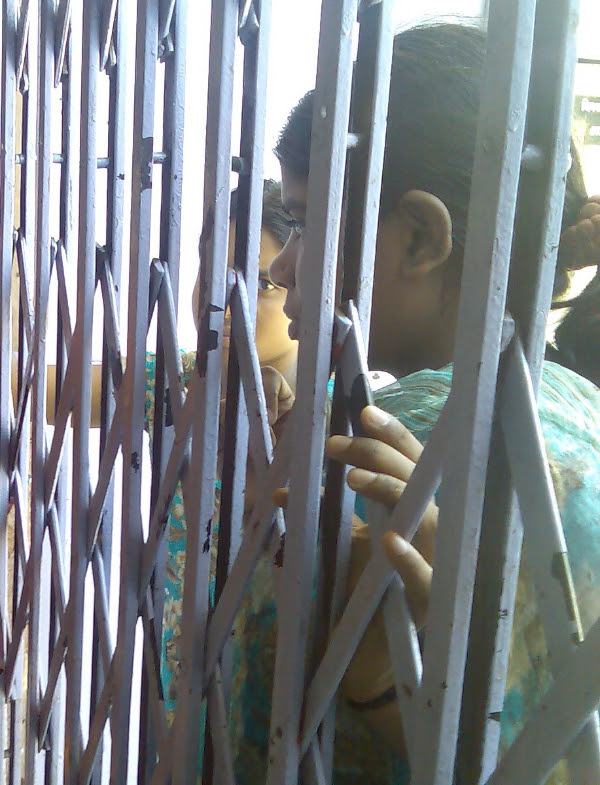