January Journeys : We Dream of Justice

“I never met with a slave who could tell me how old he was.” (My Bondage and My Freedom, Fredrick Douglas)

Its 10:20pm and Greg, Surendra and I are sitting here at the police station with the targeted girl out of the brothel and safe (for now).  I see one of the brothel pimps signaling to a police officer surreptitiously.  Are they making a plan to get our newly rescued girl released?  Are they planning to just release the brothel keeper? And as I look from face to face in that crowded station I can read everything from disbelief to amusement to indifference.  Most are just curious.

The brothel keeper sits next to the girl.  They are the same height, maybe 5 ft, and same structure.  Both are round and plump. For her age, the girl seems surprisingly heavy.  Most poverty stricken young girls are slender in the extreme. I immediately wonder about hormones and drugs.  The weight just doesn't look natural.  I study the brothel keeper.  I catch a glimpse of her skin under her sari in an unguarded moment. She is the exact same shade as the girl. They are both from the same location in Rajasthan.

Later that night the police force the brothel keeper to remove her sari head covering for a moment.    The girl looks like the brothel keeper.  They are certainly related; I suspect they are mother and daughter.  The police think so too, and wanted to talk about it later at the court.  “Do you think that is her mother, madam?” a police man asked me.  I shrugged. “They look the same.”  He nodded.

The case looks strong.  Surendra witnessed the direct transaction where the brothel keeper asked for money for the girl.  The police treat the victim and the accused as if they are both criminals.  The girl doesn't look a day above sixteen, but she claims she is twenty five.  She is well trained and parrots the lies she's been told.  We will see what the age verification test says.  If it doesn't get tampered with at the hospital.

A riotous group from the media and press come into the police station, snapping photos and aggressively asking questions.  Greg walks over and covers the girls face with her scarf. The media should know better than to take pictures of a minor and print them in the newspaper.  But the questioning is relentless and invasive.  They behave as if the girl is a criminal and they treat her the same as the brothel keeper.

One journalist in particular is cold, callous, raucous. I gather my courage and reach up and touch his sleeve.  “When you write your article, make sure your readers understand that the rescued girl is a  victim, forced into prostitution. I kept pointing out the older woman. “That is your criminal,” I said.

His reaction is huge. He said that this rescue would never change the problem, and that our NGO would leave the city in just a few days and that what we do won't make any difference in the long run.  He saddened me.  His red pan-filled mouth chewing and spitting (tobacco), his eyes shifting in agony, his laugh a hollow angry hopeless sort of laugh, full of bravery, but completely empty.

The system he wrote about every day had failed him.  He knew its secrets, its crimes, its seedy corruption and he had thrown up his hands in despair, at age 25.  Everyone lies, everyone promises to help but then disappears.  He pointed around the room at the silent watching police.  “They are all corrupt I tell you. The police are  smiling, tolerant. And you,” he turned in rage to us, “Will you be here tomorrow?” He shouted. “We will be here tomorrow.  We are setting up a permanent presence in Allahabad”  Our words mean nothing.  He is deaf to our promise.  I just want to fight and argue with him.  I hate his hopelessness, his impotent rage. “You can make a difference!”  I have to calm myself.  “Write about this girl and this injustice of sex trafficking.  Let them know she is the victim. Tell her story.  Is that so hard?”

But Greg speaks calmly, and he begins to listen, he is reluctant at first, but deep down he is desperate  to grasp at any plausible hope.  He still longs for something true. I see it in his eyes, and I hope we will meet in Allahabad again someday.

What happens to a dream deferred? Does it dry up like a raisin in the sun? Or fester like a sore-- And then run? Does it stink like rotten meat? Or crust and sugar over-- like a syrupy sweet? Maybe it just sags like a heavy load. Or does it explode? (A Dream Deferred by Langston Hughes 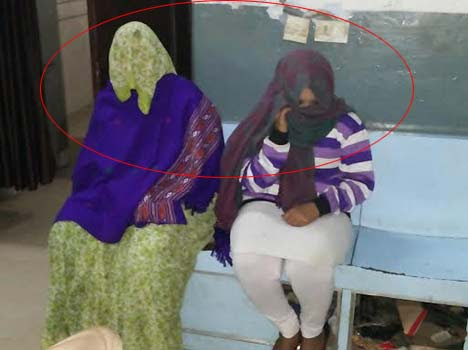 A clip from a newspaper that followed the story a day after the raid.